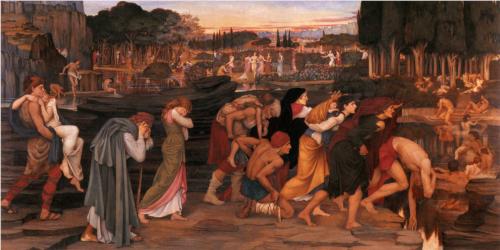 I finally had the chance to see Elysium this week. As films go, the picture is certainly visually gripping and the fight scenes awesome, if you are into that sort of thing. But, in terms of a film about ideas the picture left me scratching my head, and I could only get a clue as to the film’s meaning as intended by Neill Blomkamp, Elysium’s screenwriter and director, by looking elsewhere.

Embedded within stunning special effects Elysium is certainly meant as a moral critique of  inequality- a futuristic tale of the haves vs the have-nots. The rich, in Blomkamp’s earth of 2154 live on the space station of Elysium- a trans-humanist paradise where diseases are miraculously scanned away while the entire earth below has become a vast slum. Elysium is the mother of all gated communities the people inside it rich and beautiful while those outside suffer, and not to blow the ending, but Blomkamp is out to open the gates.

Blomkamp has made it clear that his film is less of a warning about the future than an allegory for the present.

People have asked me if I think this is what will happen in 140 years, but this isn’t science fiction. This is today. This is now!

The Elysium of today is the First World and the earth of the film the Third World with the latter’s immigrants desperate to break into “paradise” for the sake of themselves and their families. The explosion of mega-cities like the 180 million Yangtze Delta in China (which plays no role in Elysium) serves as a kind of sociological backdrop for the film. It is especially the squalor of megacities that draws Blomkamp’s cinematic eye. Part of the movie was filmed in one of the world’s largest dumps in Mexico.

And yet, Elysium certainly seems to articulate some sort of philosophical position not just on the present, but on the future, and adds its own voice to the debate surrounding its possibilities. The question is, what? I left the movie thinking it was mostly a less than veiled critique on transhumanism,  especially the in-egalitarian, utopian seasteading variety of transhumanism as propounded by the like of Peter Theil. And again, not to blow it, but the major epiphany of the protagonist is realizing that his own survival is not the ultimate value.

Blomkamp’s true perspective, however, is somewhat different as evidenced when I looked beyond the film itself. Blomkamp is actually a singularitarian, though a very pessimistic one. He subscribes to the idea of civilizational development put forward by the Russian scientist Nikolai Kardashev. I’ll quote myself  here, “… in the 1960 Kardashev postulated that civilizations go through different technological phases based on their capacity to tap energy resources. A Type I civilization is able to tap the equivalent of its entire planet’s energy. A Type II civilization is able to tap an amount of energy equivalent to the amount put out by its parent star, and a Type III civilization able to tap the energy equivalent to its entire galaxy. Type IV and Type V civilizations able to tap the energy of the entire universe or even the multiverse have been speculated upon that would transcend even the scope of Kardashev’s broad vision.

Blomkamp speculates that the reason for the so-called Fermi Paradox – if the conditions for life in the universe are so abundant, then where are the aliens?- is that the movement to Type I civilization- the emergence of a truly global civilization- is so difficult that none of the many civilizations that have emerged over the history of the universe have made it through this bottleneck, and for Blomkamp we show every sign of sharing this sad fate.

As Blomkamp sees it human nature is the greatest barrier preventing us from reaching Type I. Echoing Julian Savulescu, he has stated:

We have biological systems built into us that were very advantageous for us, up until we became a functioning civilization 10,000 years ago. We are literally genetically coded to preserve life, procreate and get food – and that’s not gonna change. The question is whether you can somehow overpower certain parts of that mammalian DNA and try to give some of your money out, try to take your wealth and pour it out for the rest of the planet.

Again, along transhumanist and singularitarian lines of thinking Blomkamp believes that if we do not solve our problem the world will bifurcate into pockets of the technologically empowered rich isolated within a global mega-city of the miserably poor:

…it’ll either be a singularity discussion or this Mad Max fuckin’ group of savages roaming on the horizon, a Malthusian catastrophe.

Alright, so like many others Blomkamp believes we are at a crossroads whose path will shape the whole fate of humanity, indeed the fate of intelligence in the universe, one more sad example of not being able to breakthrough emerge as a Type I civilization or the glorious birth of a new cosmic era.

Yet, perhaps we need to step back for a moment from this sort of apocalyptic thinking. It’s an at least questionable assumption whether or not intelligence and technology have any such cosmic role to play in the future of the universe, let alone whether the current generation will be the one that ultimately decides our fate. We’ve been in a situation where we are in danger of destroying ourselves since at least the explosion of the first hydrogen bomb in 1954, and there is no foreseeable future where we definitively escape these types of dangers now that we have such powers and now that our reach is global and beyond.

Indeed, if it is the case that civilizations are at risk of catastrophic failure whatever their position on the Kardashev Scale, this would go even further in explaining the Fermi Paradox. Even those that make it through Type I continue to be at risk of botching the whole thing. The obvious rejoinder to this is that once a civilization has”gone galactic” it is safe, but I am not so sure. Perhaps Type II and III super-intelligences come up with galactic scale methods of destruction, or collapse into a singularity induced turtle shell, as imagined so cleverly by Charles Stross. We simply don’t know enough to actually decide one way or another, although in addition to the hunt for planets in the “habitable zone” done by the beloved Kepler and its hopeful successor, scientists at FermiLab are on the hunt for any signs of Type I and II Dyson Spheres whose discovery would actually put meat on the bones of what is otherwise merely a plausible model of technological development not to mention blow our minds.

However, as I have mentioned elsewhere, a much less metaphysically laden explanation for the Fermi Paradox can be found in the simple life cycle of stars. It is only quite recently that the types of stars that create the sorts of heavy elements necessary for life (at least life as we understand it) have emerged, and the number of such heavy element creating stars in increasing. Earth might be one of the first planets to establish life and civilization, but it will in all probability not be the last. There will probably be many many more chances to get it right, if by getting it right we mean getting beyond our current technological stage. There are also likely to be many more type of paths through evolution and historical development than we could ever imagine without any ultimate destiny or convergence point, which some modern scientists and singularitarians have borrowed straight from religious longings.

There is no need to posit a potentially lost cosmic destiny to come to the conclusion that our’s or future generations’ failure to meet our global responsibilities today would constitute a colossal tragedy, and this is what we can confidently take away from Elysium. That one of the greatest challenges in front of us is making sure that all of humanity is able to benefit from scientific, technological and economic progress, and as Blomkamp’s action-packed analogy reminds us, we don’t have to go out to the 22nd century to see that we are failing to live up to this challenge quite miserably.

4 comments on “The Philosophy Behind Elysium”