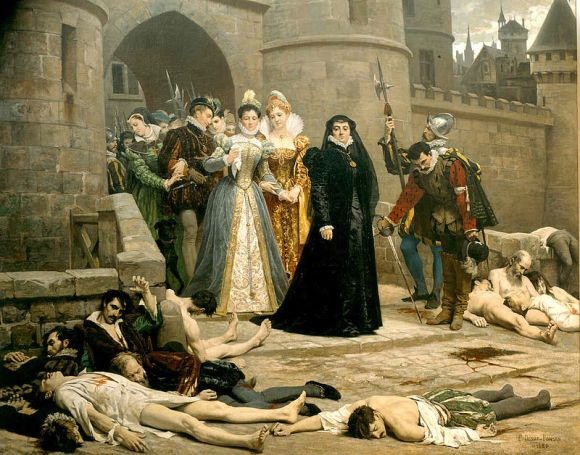 Sometimes, I get the uneasy feeling that the New Atheists might be right after all. Perhaps there is something latently violent in the religious imagination, some feature, or tendency, encouraged by religion that the world would better be without.

I kind of got that feeling after Paris and Mali, I felt it a little bit more after the attack on the Planned Parenthood office attack in Colorado, but it really hits me when I reflect on the recent brutal killings in San Bernardino where both the intimate cruelty of the act- the persons killed were one of the killer’s co-workers whom he was supposedly friends with and knew well- and the fact that the other murderer was this man’s wife, and the mother of their young child. Nothing I know about human nature allows me to make sense of how far this couple was able to step outside our evolutionarily forged instincts against harming those whom we are intimate with, and where maternal bounds prove stronger than ties of any other kind. Maybe the physicist Steven Weinberg was right when he said:

This seems to be the main point the New Atheists want to get across, as Steven Pinker did recently in a public discussion with Robert Wright on that topic, among others. Much more suffering, Pinker argued, has been caused by people acting in the name of religion than by those acting in the pursuit of self-interest in the form of raw power or wealth. For those who would counter with a list of the horrors committed by the secular totalitarian regimes in the 20th century Pinker would argue that such movements amounted to little more than religion in drag with God replaced by “History” or “Race”.

In light of recent events such an argument has the heavy feel of Truth in one’s hands, but upon reflection what seems solid begins to fall apart at the joints. To state the obvious, it simply cannot be the case that any religion is the primary cause of violence  because any society in which violence ran as deep as religious sentiment would very quickly destroy itself. Whatever Donald Trump might think, there are anywhere from 5- 12 million Muslims in the United States- were any significant portion of them driven to violence by their faith the country would truly be on fire. It’s a fact that is just as true when it comes to Christians opposed to abortion on moral grounds.

Religion has certainly been the source of many human conflicts and the origin of much suffering inflicted in the name of dogmatism, but has it really, as Pinker claims, inflicted more suffering throughout the whole of human history than all the other non-religiously based wars? Has the suffering inflicted by religious fanaticism been greater than that of oppression based on naked self-interest? Has religion not played an important role in both the charity to offset, or the direct challenge (as in the abolition of slavery) to such oppression? In any case, how in the world is one supposed to disaggregate those who were motivated to commit atrocities by their religious beliefs from those who used religion as a cover for self-interest or the blatant desire to destroy as no doubt a number of princes did during the Reformation.

It seems a gross over simplification to single out religion as a unique source of human violence. Nevertheless, I think we miss something important if we fail to see religious thinking and aspirations as indeed a deep aspect of the way the human capacity for violence has manifested itself in recent decades. This religious connection in large part grows out of the claims of the world’s major religions to be the unique possessor of spiritual truth and sole path to human salvation.

The potential for violence latent in such monopolistic truth claims is made even more dangerous by the world’s very democratization and the communications revolution of the past few decades. For in such an atmosphere religious institutions and elites are no longer able to control the beliefs and actions of their believers. It is a situation that bears an eerie resemblance to the European Reformation and Wars of Religion, but is now global in scope- our luck so far is that so very few of us have fallen under the spell of such a conflict and instead are under the enchantment of the consumerist paradise in which we live where life and its needs drown out everything else.

It’s not so much any particular religion’s claim that it is the possessor of the truth which is the origin of any tendencies towards violence as it is the belief of its adherents that they have the right to enforce conformity with their beliefs through violence if necessary. Still, with the exception of where, as is the case with ISIL, such a demand for conformity comes to rule or where deep sectarian divisions intersect with political conflicts within a society, much of this new violence appears to be waged almost as a form of communication, an attempt to break through the cacophony and materialism of pluralistic societies and be heard.

On this score, violence is just as likely to be racially (as it was in the case with Timothy McVeigh, Anders Breivik, and Dylann Roof,  or even environmentally motivated e.g. Ted Kaczynski aka the “Unabomber”) as it is to emerge from religiously based commitments. One need not take the worldview behind such violence seriously, but one should certainly take it as a barometer of deeper social fissures and political failures that go unaddressed at our peril. The same types of systemic failures that have led many on the left, with more legitimate claims to justice, into the age of protests.

The more insular and unresponsive our political and economic elites appear and the more ideological conflicts in our societies become, the more likely it is that those who believe themselves to be permanently disenfranchised will turn to political conspiracies to explain events, and the more likely a small but very dangerous minority of these disaffected will turn to violence as a form of political action. Should that become the case, elites are likely to retreat even further into their gated communities and rely on technology as a means of social control absent democratic legitimacy, commitment to the common good, and the quest for international solidarity. Such a world would represent a dark, mechanized analog to the promise of universalism and concern for the other at the heart of all the world’s great religions: a noosphere absent a world soul.