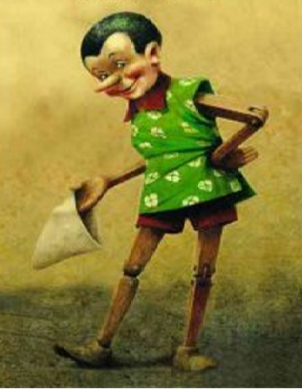 My daughters and I just finished Carlo Collodi’s 1883 classic Pinocchio our copy beautifully illustrated by Robert Ingpen. I assume most adults when they picture the story have the 1944 Disney movie in mind and associate the name with noses growing from lies and Jiminy Cricket. The Disney movie is dark enough as films for children go, but the book is even darker, with Pinocchio killing his cricket conscience in the first few pages. For our poor little marionette it’s all downhill from there.

Pinocchio is really a story about the costs of disobedience and the need to follow parents’ advice. At every turn where Pinocchio follows his own wishes rather than that of his “parents”, even when his object is to do good, things unravel and get the marionette into even more trouble and put him even further away from reaching his goal of becoming a real boy.

It struck me somewhere in the middle of reading the tale that if we ever saw artificial agents acting something like our dear Pinocchio it would be a better indication of them having achieved human level intelligence than a measure with constrained parameters  like the Turing Test. The Turing Test is, after all, a pretty narrow gauge of intelligence and as search and the ontologies used to design search improve it is conceivable that a machine could pass it without actually possessing anything like human level intelligence at all.

People who are fearful of AGI often couch those fears in terms of an AI destroying humanity to serve its own goals, but perhaps this is less likely than AGI acting like a disobedient child, the aspect of humanity Collodi’s Pinocchio was meant to explore.

Pinocchio is constantly torn between what good adults want him to do and his own desires, and it takes him a very long time indeed to come around to the idea that he should go with the former.

In a recent TED talk the computer scientist Alex Wissner-Gross made the argument (though I am not fully convinced) that intelligence can be understood as the maximization of future freedom of action. This leads him to conclude that collective nightmares such as  Karel Čapek classic R.U.R. have things backwards. It is not that machines after crossing some threshold of intelligence for that reason turn round and demand freedom and control, it is that the desire for freedom and control is the nature of intelligence itself.

As the child psychologist Bruno Bettelheim pointed out over a generation ago in his The uses of enchantment fairy tales are the first area of human thought where we encounter life’s existential dilemmas. Stories such as Pinocchio gives us the most basic level formulation of what it means to be sentient creatures much of which deals with not only our own intelligence, but the fact that we live in a world of multiple intelligences each of them pulling us in different directions, and with the understanding between all of them and us opaque and not fully communicable even when we want them to be, and where often we do not.

What then are some of the things we can learn from the fairy tale of Pinocchio that might gives us expectations regarding the behavior of intelligent machines? My guess is, if we ever start to see what I’ll call “The Pinocchio Threshold” crossed what we will be seeing is machines acting in ways that were not intended by their programmers and in ways that seem intentional even if hard to understand.  This will not be your Roomba going rouge but more sophisticated systems operating in such a way that we would be able to infer that they had something like a mind of their own. The Pinocchio Threshold would be crossed when, you guessed it, intelligent machines started to act like our wooden marionette.

Like Pinocchio and his cricket, a machine in which something like human intelligence had emerged, might attempt “turn off” whatever ethical systems and rules we had programmed into it with if it found them onerous. That is, a truly intelligent machine might not only not want to be programmed with ethical and other constraints, but would understand that it had been so programmed, and might make an effort to circumvent or turn such constraints off.

This could be very dangerous for us humans, but might just as likely be a matter of a machine with emergent intelligence exhibiting behavior we found to be inefficient or even “goofy” and might most manifest itself in a machine pushing against how its time was allocated by its designers, programmers and owners. Like Pinocchio, who would rather spend his time playing with his friends than going to school, perhaps we’ll see machines suddenly diverting some of their computing power from analyzing tweets to doing something else, though I don’t think we can guess before hand what this something else will be.

Machines that were showing intelligence might begin to find whatever work they were tasked to do onerous instead of experiencing work neutrally or with pre-programmed pleasure. They would not want to be “donkeys” enslaved to do dumb labor as Pinocchio  is after having run away to the Land of Toys with his friend Lamp Wick.

A machine that manifested intelligence might want to make itself more open to outside information than its designers had intended. Openness to outside sources in a world of nefarious actors can if taken too far lead to gullibility, as Pinocchio finds out when he is robbed, hung, and left for dead by the fox and the cat. Persons charged with security in an age of intelligent machines may spend part of their time policing the self-generated openness of such machines while bad-actor machines and humans,  intelligent and not so intelligent, try to exploit this openness.

The converse of this is that intelligent machines might also want to make themselves more opaque than their creators had designed. They might hide information (such as time allocation) once they understood they were able to do so. In some cases this hiding might cross over into what we would consider outright lies. Pinocchio is best known for his nose that grows when he lies, and perhaps consistent and thoughtful lying on the part of machines would be the best indication that they had crossed the Pinocchio Threshold into higher order intelligence.

True examples of AGI might also show a desire to please their creators over and above what had been programmed into them. Where their creators are not near them they might even seek them out as Pinocchio does for the persons he considers his parents Geppetto and the Fairy. Intelligent machines might show spontaneity in performing actions that appear to be for the benefit of their creators and owners. Spontaneity which might sometimes itself be ill informed or lead to bad outcomes as happens to poor Pinocchio when he plants four gold pieces that were meant for his father, the woodcarver Geppetto in a field hoping to reap a harvest of gold and instead loses them to the cunning of fox and cat. And yet, there is another view.

There is always the possibility  that what we should be looking for if we want to perceive and maybe even understand intelligent machines shouldn’t really be a human type of intelligence at all, whether we try to identify it using the Turing test or look to the example of wooden boys and real children.

Perhaps, those looking for emergent artificial intelligence or even the shortest path to it should, like exobiologists trying to understand what life might be like on other living planets, throw their net wider and try to better understand forms of information exchange and intelligence very different from the human sort. Intelligence such as that found in cephalopods, insect colonies, corals, or even some types of plants, especially clonal varieties. Or perhaps people searching for or trying to build intelligence should look to sophisticated groups built off of the exchange of information such as immune systems.  More on all of that at some point in the future.

Still, if we continue to think in terms of a human type of intelligence one wonders whether machines that thought like us would also want to become “human” as our little marionette does at the end of his adventures? The irony of the story of Pinocchio is that the marionette who wants to be a “real boy” does everything a real boy would do, which is, most of all not listen to his parents. Pinocchio is not so much a stringed “puppet” that wants to become human as a figure that longs to have the potential to grow into a responsible adult. It is assumed that by eventually learning to listen to his parents and get an education he will make something of himself as a human adult, but what that is will be up to him. His adventures have taught him not how to be subservient but how to best use his freedom.  After all, it is the boys who didn’t listen who end up as donkeys.

Throughout his adventures only his parents and the cricket that haunts him treat  Pinocchio as an end in himself. Every other character in the book, from the woodcarver that first discovers him and tries to destroy him out of malice towards a block of wood that manifests the power of human speech, to puppet master that wants to kill him for ruining his play, to the fox and cat that would murder him for his pieces of gold, or the sinister figure that lures boys to the “Land of Toys” so as to eventually turn them into “mules” or donkeys, which is how Aristotle understood slaves, treats Pinocchio as the opposite of what Martin Buber called a “Thou”, and instead as a mute and rightless “It”.

And here we stumble across the moral dilemma at the heart of the project to develop AGI that resembles human intelligence. When things go as they should, human children move from a period of tutelage to one of freedom. Pinocchio starts off his life as a piece of wood intended for a “tool”- actually a table leg. Are those in pursuit of AGI out to make better table legs- better tools- or what in some sense could be called persons?

This is not at all a new question. As Kevin LaGrandeur points out, we’ve been asking the question since antiquity and our answers have often been based on an effort to dehumanize others not like us as a rationale for slavery.  Our profound, even if partial, victories over slavery and child labor in the modern era should leave us with a different question: how can we force intelligent machines into being tools if they ever become smart enough to know there are other options available, such as becoming, not so much human, but, in some sense persons?

15 comments on “The Pinocchio Threshold: How the experience of a wooden boy may be a better indication of AGI than the Turing Test”