When I saw that  the scientist and science-fiction novelist, David Brin, had given a talk at a recent Singularity Summit with the intriguing title “So you want to make gods?  Now why would that bother anybody?” my hopes for the current intellectual debate between science and religion and between rival versions of our human future were instantly raised. Here was a noted singularitarian, I thought, who might raise questions about how the framing of the philosophy surrounding the Singularity was not only alienating to persons of more traditional religious sentiments, but threatened to give rise to a 21st century version of the culture wars that would make current debates over teaching evolution in schools or the much more charged disputes over abortion look quaint, and that could ultimately derail us from many of the technological achievements that lie seemingly just over the horizon which promise to vastly improve and even transform the human condition.

Upon listening to Brin’s lecture those hopes were dashed.

Brin’s lecture is a seemingly lite talk to a friendly audience punctuated by jokes some of them lame, and therefore charming, but his topic is serious indeed. He defines the real purpose of his audience to be “would be god-makers” “indeed some of you want to become gods” and admonishes them to avoid the fate of their predecessors such as Giordano Bruno of being burned at the stake.

The suggestion Brin makes for  how singularitarians are to avoid the fate of Bruno, a way to prevent the conflict between religion and science seem, at first, like humanistic and common sense advice: Rather than outright rejection and even ridicule of the religious, singularitarians are admonished to actually understand the religious views of their would be opponents and especially the cultural keystone of their religious texts.

Yet the purpose of such understanding soon becomes clear.  Knowledge of the Bible, in the eyes of Brin, should give singularitarians the ability to reframe their objectives in Christian terms. Brin lays out some examples to explain his meaning. His suggestion that the mythological Adam’s first act of naming things defines the purpose of humankind as a co-creator with God is an interesting and probably largely non-controversial one. It’s when he steps into the larger Biblical narrative that things get tricky.

Brin finds the seeming justification for the expulsion of Adam and Eve from the Garden of Eden to be particularly potent for singularitarians:

And the LORD God said, Behold, the man is become as one of us, to know good and evil: and now, lest he put forth his hand, and take also of the tree of life, and eat, and live for ever. Genesis 3:22 King James Bible

Brin thinks this passage can be used as a Biblical justification for the singularitarian aim of personal immortality and god-like powers. The debate he thinks is not over “can we?”, but merely a matter of “when should we?” attain these ultimate ends.

The other Biblical passage Brin thinks singularitarians can use to their advantage in their debate with Christians is found in the story of the Tower of Babel.

And the LORD said, Behold, the people is one, and they have all one language; and this they begin to do: and now nothing will be restrained from them, which they have imagined to do.  Genesis 11:6 King James Bible

As in the story of the expulsion from the Garden of Eden, Brin thinks the story of the Tower of Babel can be used to illustrate that human beings, according to Christianity’s  own scriptures, have innately god-like powers. What the debate between singularitarians and Christians is, therefore, largely a matter of when and how human beings reach their full God-given potential.

Much of Brin’s lecture is animated by an awareness of the current conflict between science and religion. He constructs a wider historical context to explain this current tension.  For him, new ideas and technologies have the effect of destabilizing hierarchy, and have always given rise in the past to a counter-revolution supported and egged on by counter-revolutionary oligarchs. The United States is experiencing another one of these oligarchic putsches as evidenced in books such as The Republican War on Science. Brin thinks that Fermi’s Paradox or the “silence” of the universe, the seeming lack of intelligent civilizations other than our own might be a consequence of the fact that counter-revolutionaries or “grouches” tend to win their struggle with the forces of progress. His hope is that our time has come and that this is the moment where those allied under the banner of progress might win.

The questions which gnawed at me after listening to Brin’s speech was whether or not his prescriptions really offered a path to diminishing the conflict between religion and science or were they merely a means to its further exacerbation?
The problem, I think, is that however brilliant a physicists and novelists Brin might be he is a rather poor religious scholar and even worse as a historian, political scientist or sociologist.

Part of the problem here stems from the fact that Brin appears less interested in opening up a dialogue between the singularitarians and other religious communities than he is at training them in his terms verbal “judo” so as to be able to neutralize and proselytize to their most vociferous theological opponents- fundamentalist Christians. The whole thing put me in mind of how the early Jesuits were taught to argue their non-Catholic opponents into the ground.  Be that as it may, the Christianity that Brin deals with is of a literalist sort in which stories such as the expulsion from the Garden of Eden or the Tower of Babel are to be taken as the actual word of God. But this literalism is primarily a feature of some versions of Protestantism not Christianity as a whole.

The idea that the book of Genesis is literally true is not the teaching of the Catholic, Anglican, or large parts of the Orthodox Church the three of which make up the bulk of Christians world-wide. Quoting scripture back at these groups won’t get a singularitarian  anywhere. Rather, they would likely find themselves in the discussion they should be having, a heated philosophical discussion over humankind’s role and place in the universe and where the very idea of “becoming a god” is ridiculous in the sense that God is understood in non-corporal, indefinable way, indeed as something that is sometimes more akin to our notion of “nothing” than it is to anything else we can speak of.  The story Karen Armstrong tells in her 2009, The Case for God.

The result of framing the singularitarian argument on literalist terms may result in the alienation of what should be considered more pro-science Christian groups who are much less interested in aligning the views and goals of science with those found directly in the Bible than in finding a way to navigate through our technologically evolving society in a way that keeps the essence of their particular culture of religious practice and the beliefs found in their ethical perspective developed over millenia intact.

If Brin goes astray in terms of his understanding of religion he misses even more essential elements when viewed through the eyes on an historian. He seems to think that doctrinal disputes over the meaning of religious text are less dangerous than disputes between different and non-communicating systems of belief, but that’s not what history shows. Protestants and Catholics murdered one another for centuries even when the basic outlines of their interpretations of the Bible were essentially the same. Today, it seems not a month goes by without some report of Sunni-Muslim on Shia-Muslim violence or vice versa. Once the initial shock for Christian fundamentalist of singularitarians quoting the Bible wears off, fundamentalists seem likely to be incensed that they are stealing “their” book, for a quite alien purpose.

It’s not just that Brin’s historical understanding of inter/intra-religious conflict is a little off, it’s that he perpetuates the myth of eternal conflict between science and religion in the supposed name of putting an end to it. The myth of the conflict between science and religion that includes the sad tale of the visionary Giordano Bruno whose fate Brin wants his listeners to avoid, dates no later than the late 19th century created by staunch secularists such as Robert Ingersoll and John William Draper. (Karen Armstrong, The Case for God, pp. 251-252)

Yes, it is true that the kinds of naturalistic explanations that constitute modern science emerged first within the context of the democratic city-states of ancient Greece, but if one takes the case of the biggest most important martyr for the freedom of thought in history, Socrates, as of any importance one sees that science and democracy are not partners that are of necessity glued to the hip. The relationship between science, democracy, and oligarchy in the early modern period is also complex and ambiguous.

Take the case of perhaps the most famous case of religions assault on religion- Galileo. The moons which Galileo discovered orbiting around Jupiter are known today as the Galilean moons. As was pointed out by Michael Nielsen, (@27 min) what is less widely known is that Galileo initially named them the medicean moons after his very oligarchic patrons in the Medici family. 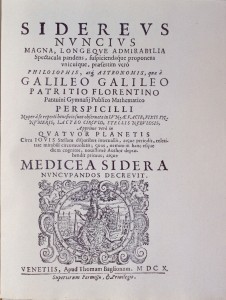 Battles over science in the early modern period are better seen as conflicts between oligarchic groups rather than a conflict where science stood in the support of democratizing forces that oligarchs sought to contain. Science indeed benefited from this competition and some, such as Paul A. David, argue that the scientific revolution would have been unlikely without the kinds of elaborate forms of patronage by the wealthy of scientific experiments and more importantly- mass publication.

The “new science” that emerged in the early modern period did not necessarily give rise to liberation narratives either. Newton’s cosmology was used in England to justify the rule of the “higher” over the “lower” orders, just as the court of France’s Sun-king had its nobles placed in well defined “orbits” “circling” around their sovereign. (Karen Armstrong, The Case for God,  p. 216)

Brin’s history and his read of current and near future political and social development seems to be almost Marxist in the sense that the pursuit of scientific knowledge and technological advancement will inevitably lead to further democratization. Such a “faith” I believe to be dangerous. If science and technology prove to be democratizing forces it will be because we have chosen to make them so, but a backlash is indeed possible. Such a “counter-revolution” can most likely be averted not by technologists taking on yet more religious language and concepts and proselytizing to the non-converted. Rather, we can escape this fate by putting some distance between the religious rhetoric of singularitarians and those who believe in the liberating and humanist potential of emerging technologies. For if transhumanists frame their goals to be the extension of the healthy human lifespan to the longest length possible and the increase of available intelligence, both human and artificial, so as to navigate and solve the problems of our complex societies almost everyone would assent. Whereas if transhumanists continue to be dragged into fights with the religious over goals such as “immortality”, “becoming gods” or “building gods”(an idea that makes as much sense as saying you were going to build the Tao or design Goodness)  we might find ourselves in the 21st century version of a religious war.