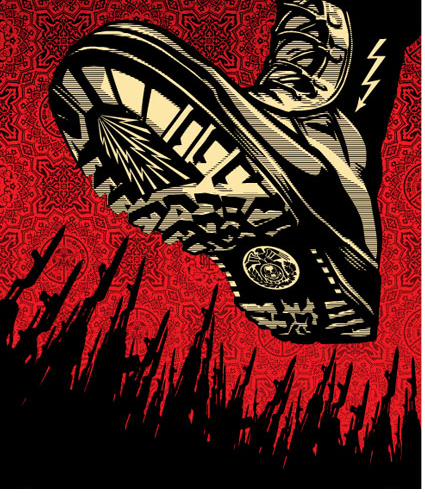 The Iron Heel is a 1908 novel by Jack London. It’s a novel which I think is safe to say is not read much today, which is a shame especially for an Americans, for the setting for what was the world’s first modern political dystopia, a novel written when Orwell and Huxley were just babes in the cradle was the United States itself.

Reading the novel as an American gives puts one in a kind of temporal vertigo. It’s not only like finding a long forgotten photograph of oneself and being stuck with the question “is that really me?”, it as if when one turned the photo over one found a note from scribbled n from yourself to yourself a kind of time capsule rich with the assumption that the past “you” knew who the “you” reading the note would be. It makes you start asking questions like “am I the person who I thought I would be?” and set to pondering on all the choices and events which have put you on, or diverted you from, your self-predicted path.

The Iron Heel tells the story of the rise of , “The Oligarchy”, a fascist state deftly laid in almost all of its details before fascism had even been invented. The fact that London pictures the rise of not only the world’s first fascist regime, but what might be considered the world’s first communist revolution not “out there” in the Old World, but on the familiar grounds of the United States where places like California, Idaho, “Indian Territory”, Chicago and Washington D.C. are the setting for events that are hauntingly similar to ones that would indeed happen in Europe decades later, turn the novel into a kind of alternative history.

The story itself is presented in the form of a kind of time capsule, a buried manuscript that has been discovered by a scholar, Anthony Meredith,  in the year 2,600 AD. Footnotes throughout the book are written from this very long view of the future when, after centuries of repression and false starts, a true Brotherhood of Man has been obtained.

The manuscript,  footnoted by Meredith,  contains the story of, Avis Everhard, the wife and fellow revolutionary of seminal figure in London’s fictional history, Ernest Everhard. Avis tells the tale of an early 20th century America racked by inequality, class divisions, and the most brutal forms of labor exploitation. These conditions set the stage for a looming socialist revolution, a political alliance between industrial labor in the form of a Socialist Party, and American farmers in the Grange Movement, that is preempted by the forces of capital. Ernest Everhard is elected as a socialist US Senator, one of many members of the Socialists and Grange Movement who have been swept into national and state office by the groundswell of support for revolutionary change.

The chance to change American  society through constitutional means does not last long. The Oligarchs use a feigned terrorist incident in the US Capitol to turn the American Constitution into a mere facade. Members of the Grange Movement are barred from taking their seats in state legislatures. Socialists are hounded from office pursued as potential terrorists and arrested. The Oligarchs create new mechanisms of social control.  London, writing before the US had a true and permanent standing Army, describes how The Oligarchs turn the state militias into a national army “The Mercenaries” with their own secret service tied to the police that will act against any perceived challenges to the social order.

Writing a generation before corporatism was even conceived, London describes how this oligarchic coup would manage to divide and conquer the forces of labor by essentially buying off and vesting in the system vital workers such as those in steel or railroads so that crippling general strikes became impossible, and all other unskilled labor was pushed into what we would understand as Third World conditions of bare survival. These wage slaves would be compelled to build the glittering new cities of the Oligarchs such as Ardis and Asgard.

The lower classes are robbed of that singularly American right- the right to bare arms, and only allowed to travel using an internal passport system similar to the one used in Czarist Russia.

The Oligarchs again set out to short- circuit revolution, this time by staging a massive military assault on the heart of American labor, Chicago. The assault unleashes violent clashes between the well-armed Mercenaries and police forces and howling crowds of the poor armed only with household tools: knives, clubs, axes. In scenes far more gripping than those in Collin’s Catching Fire, London depicts urban warfare between security forces fighting raging crowds and bomb throwing insurgents who attack their targets from the heights of skyscrapers, in a way surely reminiscent of Fallujah, or even more so, what is going on right now in Syria.

Eventually, the oligarchic forces burn the poor sections of Chicago to the ground, and end all chance of successful revolution within the lifetime of the Everhard’s. In such conditions the effort at revolution becomes pure terrorism, the names of the terrorists groups no doubt reflective of the limited geographical area in which they operate and America’s history of resistance to the powers of the federal government such as the Mormon group the Danites or the Comanches.

The Oligarch’s suppression of revolutionary forces eventually reaches the Everhard’s. The novel ends abruptly with Avis’s narration stopping in mid-sentence.

The Iron Heel is a kind of warning, and the strange thing about this warning is that London, who was labeled a gloom obsessed pessimists by many of his fellow socialists, got so much of what would happen over the next 50 or so years eerily right, with the marked exception of where they were to occur.

Such prescience is hard to achieve even for someone as brilliant as the fellow novelist Anatole France the author of the introduction to the 1924 edition of the The Iron Heel I hold in my hand.

France, who was 80 at the time and would die the same year, thinks London was right, that the Iron Heel was coming, but doesn’t think it will arrive for quite some time.

“In France, as in Italy and Spain, Socialism, is for the moment, too feeble to have anything to fear from the Iron Heel., for extreme feebleness is the one safety of the feeble. No Heel of Iron will trouble itself to tread down this dust of a party”. (xiv)

1924 is the same year that the murder of socialist Giacomo Matteotti truly began the fascist dictatorship in Italy- a kind of corporate state that was certainly anticipated by London in The Iron Heel. Within 6 years “feeble” Spanish socialism would be locked in a civil war with fascism, within 9 years, the Nazis would rise to power on the backs of the same sort of fears of revolution, and using the same kinds of political machinations described in The Iron Heel. The bombing of the Reichstag ,which was blamed on the German communists but really committed by the Nazi’s, became the justification for an anti-revolutionary crackdown and the transformation of German democracy into a sham. It makes one wonder if Hitler himself had read The Iron Heel!

The Iron Heel throws up all sorts of historical questions and useful analogies for the current day. Why did neither revolutionary socialism or outright fascism emerge in the US in the 1930’s as it did elsewhere?

The Iron Heel should perhaps be read as part of a trilogy with Sinclair Lewis’ 1936 It can’t happen here! Which describes the transformation of America into a Nazi-like totalitarian state, or Philip Roth’s 2004 The Plot Against America which describes a similar fascists regime which comes about when the Nazi sympathizer and isolationist, Charles Lindberg, win the presidential race against Franklin Roosevelt. Full reviews of both will be found here at some point in the future the point for now being that there were figures and sentiments in American politics that might have added up to something quite different than American exceptionalism during this period. That what we ended up with was as much the consequence of historical luck as it was of any particularly American virtue.

Some, on both the right and the left would argue that what we have now is just a softer version of the tyranny portrayed by London, Lewis, and Roth, and they do indeed have something, but I do not as of now want to go there. The reason, I think, the kind of socialist revolution found in other countries never got legs in the United States the way it did elsewhere was that the US, which had been a hotbed of labor unrest and socialist sentiment and anticipation in the late 19th and early 20th centuries, willingly adopted a whole series of reforms that made worker grievances against capitalism less acute.

In addition controls were placed on financial markets so that the kinds of wild swings, financial panics, that periodically brought the nation’s economy to its knees would no longer occur.

Even when derided on the right as move towards socialism or on the left as delusional reformism, these changes followed by an unprecedented era of prosperity for the middle class from the 1940s through the 1970s, essentially ended the vicious circle presented in the Iron Heel of a political system unresponsive to worker grievances and exploitation that gave rise to forces of social revolution that in turn  engendered a move towards state violence and tyranny by the wealthy elites, which resulted in widespread terrorism by continually frustrated revolutionaries.

As a system for producing widespread prosperity faltered in the 1970s the American right, followed by increasingly centrist Democrats diagnosed the economic malaise as having originated from both the choke hold American unions had over the economy and the stifling effects of too much government interference.  Through the 1980s and 90s labor union power was dismantled, economic production globalized, capital markets freed up from earlier constraints, welfare reformed. Support for the lower classes was now to come not primarily through government programs, but through tax policy, such as the Earned Income Tax, that would free individuals to make their own choices and vest them in the capitalist economic system rather than view them as an opposition. Such reforms with their explicit claim that they would lead to universal prosperity collapsed with the 2008 financial crisis and neither the American right nor the American left has any clear understanding of where we go from here.

This history is what makes the recent video of Romney and his 47% comments so galling. His fellow oligarch’s who had paid more than the median income of an average American family- $50,000- to listen to his speech laugh and clink their silverware as he describes the sad state of American society where over half of the county either receive some government support or pay no taxes to the federal government. Romney and his audience forget how we got here: that the working class were granted their “privileges”  because the only way to otherwise sustain him and his fellow oligarchs would be through a regime of violence. That the fact that so many Americans don’t pay federal income tax was brought about by Republicans who hoped to entrench the idea that the system of free enterprise was for the good of rich, middle class and poor alike.

Romney and his listeners are oblivious to the long-view. In a way I wish I could send them all a copy of The Iron Heel.

Would I charge, or could it be a tax write-off?

15 comments on “The Iron Heel and the Long-view”